"Know your roots. Be proud of where you came from."

Sam Effah, two-time Commonwealth Games finalist and Commonwealth Sport Canada (CSC) Athlete Council member presented a SportWORKS Live Chat on Friday, 24 April 2020. The Live Chat was of particular interest to newcomer youth to Canada, although attendance was open to all. Attendees included newcomer youth, staff and volunteers from CSC’s SportWORKS programme partners: The Spot - Jane/Finch Community and Family Centre and Action for Healthy Communities, as well as a number of members from the Canadian sport community and sport for development organisations.

During an engaging and interactive presentation, Sam spoke about life lessons he gained through sport, growing up a second generation Canadian and his experience as a finalist in the Commonwealth Games.

Sam started his presentation with a breathtaking re-enactment of a race, bringing all onto the track with him: “I walk into the stadium. My head is down.  I’m staring at the numbers on the lanes. The stadium is packed. I can barely hear my own thoughts. The crowd is nuts. This is actually pretty crazy. Stay focused, Sam. You’ve got this. I walk out to the starting blocks. This is the real deal. It’s now time for my game face. This is what I came here for. On your mark. Get set. Take off….”

He said that competing in races like this used to define him, that he was only focused on winning, but that this has changed. It’s now more than getting on the podium and getting medals. In addition to being the fastest and wearing the maple leaf on his chest, he also wants to give back by being a speaker and inspiring others, true to his values and creating positive change. He is involved in a number of programmes such as Classroom Champions, Right to Play and CSC’s SportWORKS program.

I realised then that being an athlete is bigger than being on a podium and getting medals, it’s about making an impact on your community.

He also spoke on the incredible influence of his Ghanaian father, who immigrated to Canada with only $100 on him. He quoted this: “Sammy in everything you do, no matter how big, no matter how little, make sure you do it with passion and don’t forget where you came from. It will keep you humble and will push you farther than you can ever imagine. Know your roots. Be proud of where you come from." 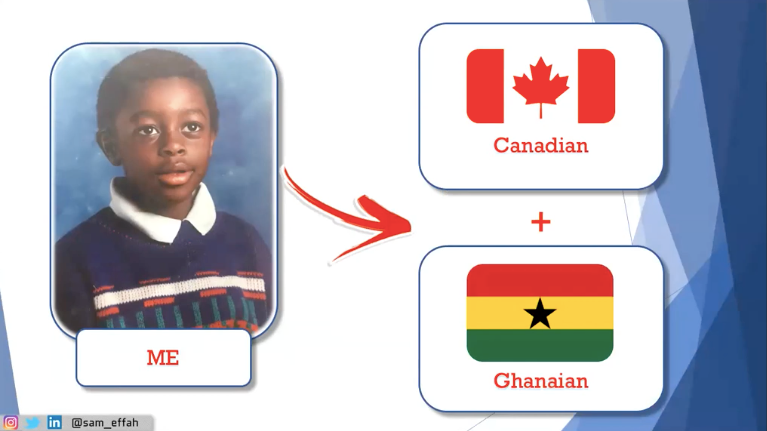 For those who work with disadvantaged youth wanting to go to the Olympic Games, he said: “Surround yourself with positive people, and if you can’t, try and be around positive people. If you are around successful people, you will be successful.” He added that he hoped that he had inspired those in attendance to go after their dream.

Sam Effah is a two-time Canadian 100m Champion, two-time Commonwealth Games Team Canada member and is currently training for the 2021 Olympic Games at his base at the Olympic Oval in Calgary. He has represented Canada at two World University Games and three World championships. He took part in Canada’s “Amazing Race” in 2019, finishing 2nd.

Sport for Development Webinar: The impact of COVID-19 and community recovery

The future of sport and development: Investing in teaching, learning and research