HomeNews and viewsNewsDefining and measuring social legacies of sport events

What are the legacies of Mega Sports Events, and how can sport for development outcomes be conceived, implemented and measured as sustainable legacies?

The Organizing Committee of the Summer Olympic Games in Tokyo implemented different initiatives in preparation for the Games, trying to use them as “a springboard to push the city's legacy forward and enrich the lives of its people for years to come”. The purpose of these initiatives is the creation of tangible and intangible legacies. Unfortunately, the COVID-19 pandemic caused complications in the creation and delivery of legacies planned by the organizers before, during and after the Olympic Games in Tokyo.

When Mr. John Furlong, the former President and CEO of the Vancouver Organising Committee for the 2010 Olympic and Paralympic Winter Games was invited to the “Dream Together Seoul Forum” in 2017, he began with the following words:

“It is interesting listening to people talk about legacy and I think probably everyone in the room perhaps has a different definition of what it is. We would describe it differently but the one thing I think everyone would say is, however you describe it, whatever you have to say about it, it is important”.

This means that for each Olympic Games, legacy outcomes should be measured based on the specific vision, objectives, and local context, posing a challenge for the standardization of measurement methodologies.

Additionally, because of the lack of proper measurements and communication to citizens, the legacies of previous Olympic Games and other Mega Sports Events have been also charged with symbolism. According to a systematic review on Olympic Legacy Reports, made in 2017 by Preuss and Scheu, 39% of the 204 Legacy Reports analysed were only conceptual or commentary type studies, representing the largest percentage of studies/reports. Most of these papers describe legacies in a narrative way, but do not draw on empirical figures.

For example, one of the initiatives planned by Tokyo 2020 was to foster an enduring Olympic and Paralympic spirit in the next generation through educational content. According to the document named “Building the Legacy - Beyond 2020” published by the Tokyo 2020 Games organizers, this initiative will create the following legacy:

“The irreplaceable mental and physical legacy that remains in each child: The memories that children have of the thrill of the Games will be a legacy that feeds into their futures.”

How can this type of legacy be measured? Would attaching monetary value to it help to measure and communicate the results of the initiatives related to intangible legacies?

In the spirit of fostering dialogues and exploring new horizons, SCORE – a Sport Think Action Tank based in Lausanne – organized a SCORE Lab, a meeting which draws on expertise from within and outside of sports to address, in this case, problems and challenges faced by organizing committees, hosts cities and other stakeholders (local population and governing bodies) in the context of sport events legacy (i.e., measurement and communication).

The initial purpose of the session was to explore a system where Sport for Development outcomes (S4DO) have a known monetary value in order to help to convey the holistic socio-economic opportunities for the host communities. However, the participants discussed and identified challenges and methodological issues related to the definition, conception and measurement of social legacies, as sport events account for many intangible legacies, which are harder to quantify. Participants also highlighted the importance of involving additional stakeholders (citizens representatives and event managers) and discussed additional opportunity costs in using resources to measure social legacies - if certain resources are used to measure social legacies, the economic or tangible legacies may decrease. 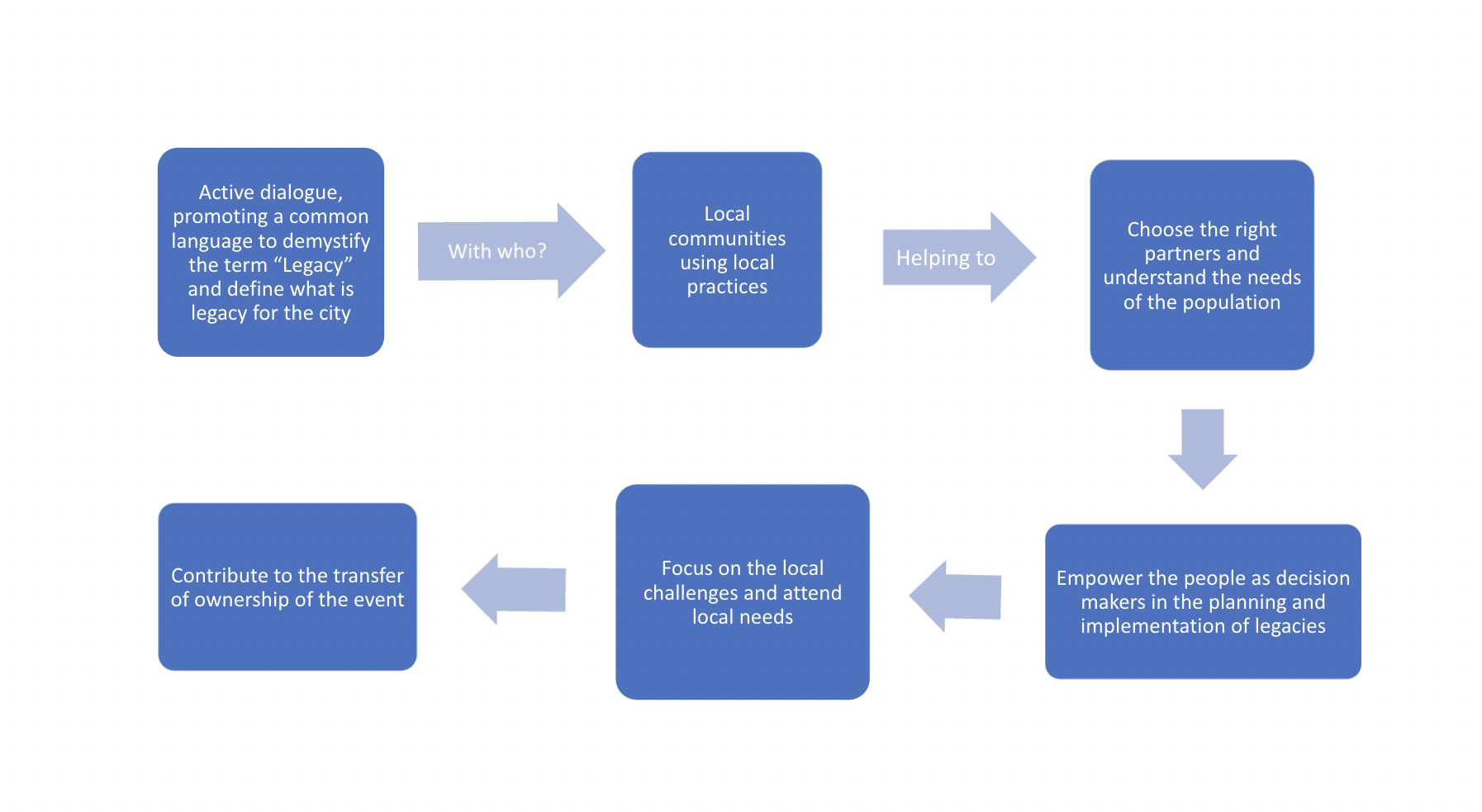 Considering the questions raised during the SCORE Lab session, especially the one related to measuring, how can organizers and host cities demonstrate strong causality between the actions implemented and their effect on citizens? And bringing back the Tokyo 2020 initiative, how can stakeholders establish the mechanisms to promote and measure a clear relation between “the memories that children have of the Games”  and the actions and decisions they take in the future?

Trying to tackle the issue of causality, the Organizing Committee of Paris 2024 and other stakeholders have launched several initiatives where the integration of local players and disadvantaged neighbourhoods play a key role. According to the Economie Sociale et Solidaire platform (ESS 2024), three principles are embedded in every initiative:

These principles are aimed at helping organizers demonstrate a clearer impact of the initiatives and reach the objective of “organizing the first inclusive and solidary games of history.”

Will the Paris 2024 Games reach the objective?