Sport plays an important role in community development and the empowerment of marginalized communities around the world. We need to help lift up LGBTQ+ communities using sport.

LGBTQ+ peoples around the world are still persecuted. The Human Dignity Trust states that there are still 72 countries that criminalize LGBT people, and over half of these countries are in the Commonwealth. In 11 of these countries, being LGBTQ+ is still punishable by death. In developed countries like Canada, while a lot of progress has been made, homophobia is still reflected in many government and private sector policies and in society.

LGBTQ+ people are also not explicitly mentioned in any of the United Nations Sustainable Development Goals. Lesbains and Transgender women fall under Goal 5, Gender Equality, but it does not address the homophobia and transphobia that they face. Goal 10, Reducing Inequalities addresses the unequal distribution of wealth around the world. Target 10.2: By 2030, empower and promote the social, economic and political inclusion of all, irrespective of age, sex, disability, race, ethnicity, origin, religion or economic or other status, does not list sexuality. As such, LGBTQ+ peoples are not the focus of many international development programs and often neglected in sport for development and peace projects.

How can sport address these problems?

Sport has an important role to play in advocacy and changing the narrative on LGBTQ+ discrimination around the world.

Hosting committees can ensure that sport is inclusive for all athletes by taking action during large sporting events. Hosting Pride Houses at the Olympic Games and other multi-sport events is an important step for advocating for LGBTQ+ peoples. Inclusion should not, and does not, end at a Pride House. Other events during sporting events can and should take place. Putting the statements like below from the 2019 Winter Canada Games around facilities and in athlete villages puts it upfront that this is a place for everyone. 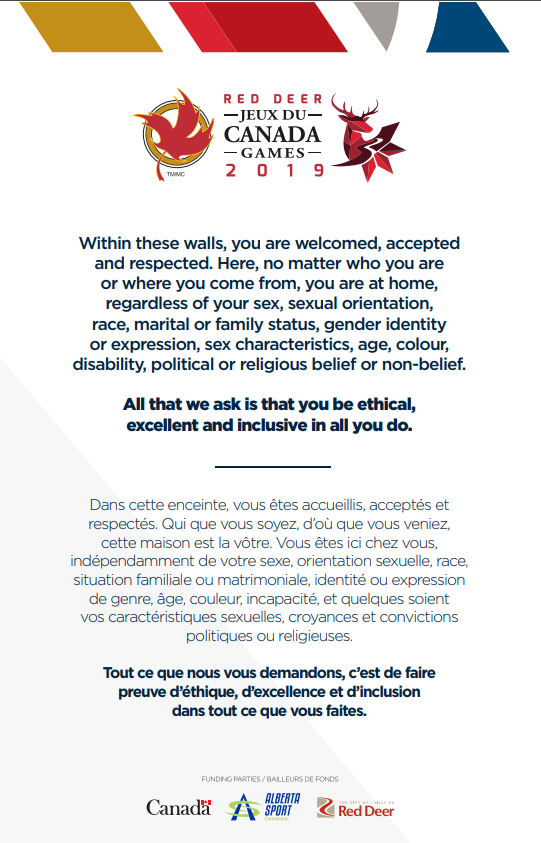 Sport organisations can also take steps by allowing transgender and intersex people to compete in the gender with which they indetify. The Canada Games Council adopted their Gender Inclusion policy in advance of the 2019 Winter Games in Red Deer. There have been positive developments at the international level - at the International Olympic Committee, in 2015 they approved the policy that transgender people do not have to have gender reasignment surgery; however athletes are still required to show that their testosterone levels are below 10 nmol/L for at least 12 months prior to her first competition.

Recently we have seen in the news the story of Caster Semenya as she continues her struggles against discriminatory policies in sport. Just last month, she lost her legal battle to overturn IAAF’s testosterone regulations that keeps her from competing in races over 400m unless she agrees to lower her testosterone level through medication or surgery.

In many sports for development programs, sport is identified as an important tool for empowerment. Sports help build confidence and build connections with the community. If we can use sport to help youth development around the world, and show that LGBTQ+ peoples are not so different than ourselves, we can help change the mindsets and the negative societal conceptions about LGBTQ+ peoples. We can use sport to help building confidence for LGBTQ+ youth.

LGBTQ+ peoples are also affected by poverty, and health issues (among other development challenges) just like anyone else can be. International development needs to be geared towards fighting homophobia so that LGBTQ+ peoples can get lifted out of poverty and get the health care that they need. Sometimes the needs of this community are different and need to be taken into consideration when developing programming. Sports are a versatile tool that can be implemented and help these people.

Sport can also be a platform for advocating for LGBTQ+ peoples. At the Commonwealth Games in 2018, British Diver Tom Daley used his gold medal win to call on 37 Commonwealth countries to decriminalize homosexuality. Before Sochi 2014, the Canadian Olympic Committee launched it’s One Team program. This program was partly to highlight Russia’s anti-gay propganda laws that came into affect before the Olympics. This program focuses on promoting LGBTQ+ inclusion in schools and sport throughout the country. Sport organisations and athletes can use their resources to make change.