Football for Humanity has been travelling the world distributing "unpoppable" footballs to bring sport and play for development to all corners of the world, with the help of global ambassador Lionel Messi.

Registered in January 2017, Football for Humanity (FFH) is a non-profit non-government organisation dedicated to using sport and the power of play to inspire, empower and transform the lives of children affected by extreme poverty, natural disasters, and armed conflict.

Our initiatives include building football infrastructure such as our unique small-sided, five-a-side enclosed spaces, establishing football development and educational programmes, conducting one-off football trainings and events, donating old and new football equipment, assisting talented but underprivileged youth to seek scholarships, and other charitable initiatives that may be implemented by its partners who are themselves NGOs engaged in social development programmes locally and nationally.

We recently launched the Play for Goals movement, which is an expanded community development programme with the five-a-side pitch being the central component. Other components to these types of projects are the building of libraries and clean water systems that address the educational, health, and well-being needs of the community and its children. For this project, FFH has partnered with Library Renewal Partnerships and Waves for Water in bringing these facilities to marginalised communities all over the Philippines, starting with Zonta Village in Barangay Tibungco, Davao City, which was implemented in partnership with local sports and peace organisations, namely Maharlika Sports Development Institute, Davao South Regional FA and the Mindanao Peace Council.

Towards the end of 2018, the foundation was awarded a donation of “unpoppable” soccer balls by One World Play, the creator of the unpoppable balls which were a “solution for kids living in harsh conditions where standard soccer balls don’t last long.” One World Play, with its sponsors, has distributed over two million balls impacting over 60 million youth whose lives are empowered and enriched by play. This initial donation is currently being distributed via individuals and organisations who lead football development programmes for Filipino youth. 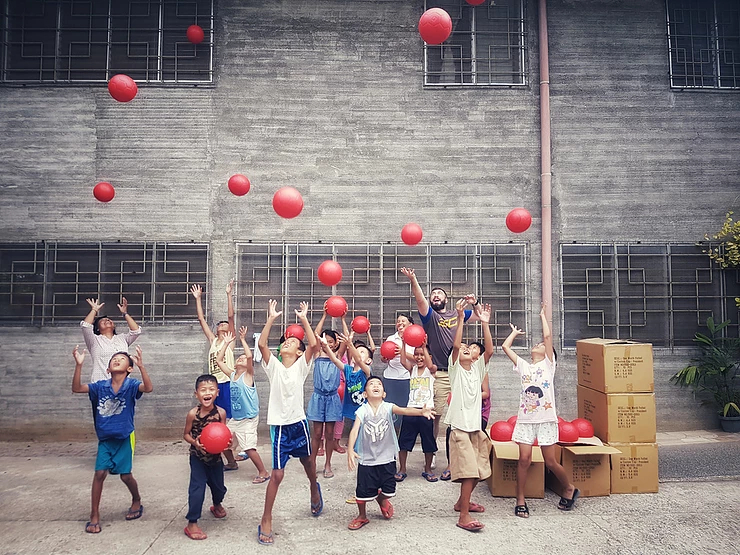 A few weeks after receiving the initial donation, Lisa Tarver, the founder and chief impact officer of One World Play Project informed FFH founder Chris Thomas that Expo 2020 Dubai was set to donate 2,020 durable balls to Football for Humanity. The balls represent Expo 2020’s aim to facilitate collaboration and the strengthening of ties within communities while spreading happiness.

The initiative is part of a campaign that includes a video starring Expo 2020 global ambassador Lionel Messi, sharing the message that the world is better when we act together.

In his role with Expo 2020 Dubai, Messi said: “A football team can only succeed by working together, and the same is true of humanity. When people from different nations, cultures and backgrounds come together we can better address global challenges and create a brighter future for generations to come.” Expo 2020 Dubai is giving 2,020 durable footballs to children in Jordan and Kenya, as well as the Philippines, totaling 6,060 balls.

We support vulnerable children at risk of violence and exploitation.