A.S.D. Balon Mundial is an Italian non-profit organization created to support football and sport as tool for social inclusion and to combat discrimination in society. Their refugee tournament, "Football Communities", involves the Turin reception centres which host asylum seekers and refugees. It is a meeting place where participants have the opportunity to create new relationships playing football. Balon Mundial trains male and female refugee teams, including Senza Frontiere Football Club (Without Borders). The team follows a football and employability programme in which football is used to improve the players’ soft skills, thus opening up job opportunities.

Hello everybody. My name is Sadio Malang and I come from Senegal. I left Senegal because there was a bad situation in my region Casamance - there was an on-going war, so I decided to leave. I play for Senza Frontiere Football Club (Without Borders). 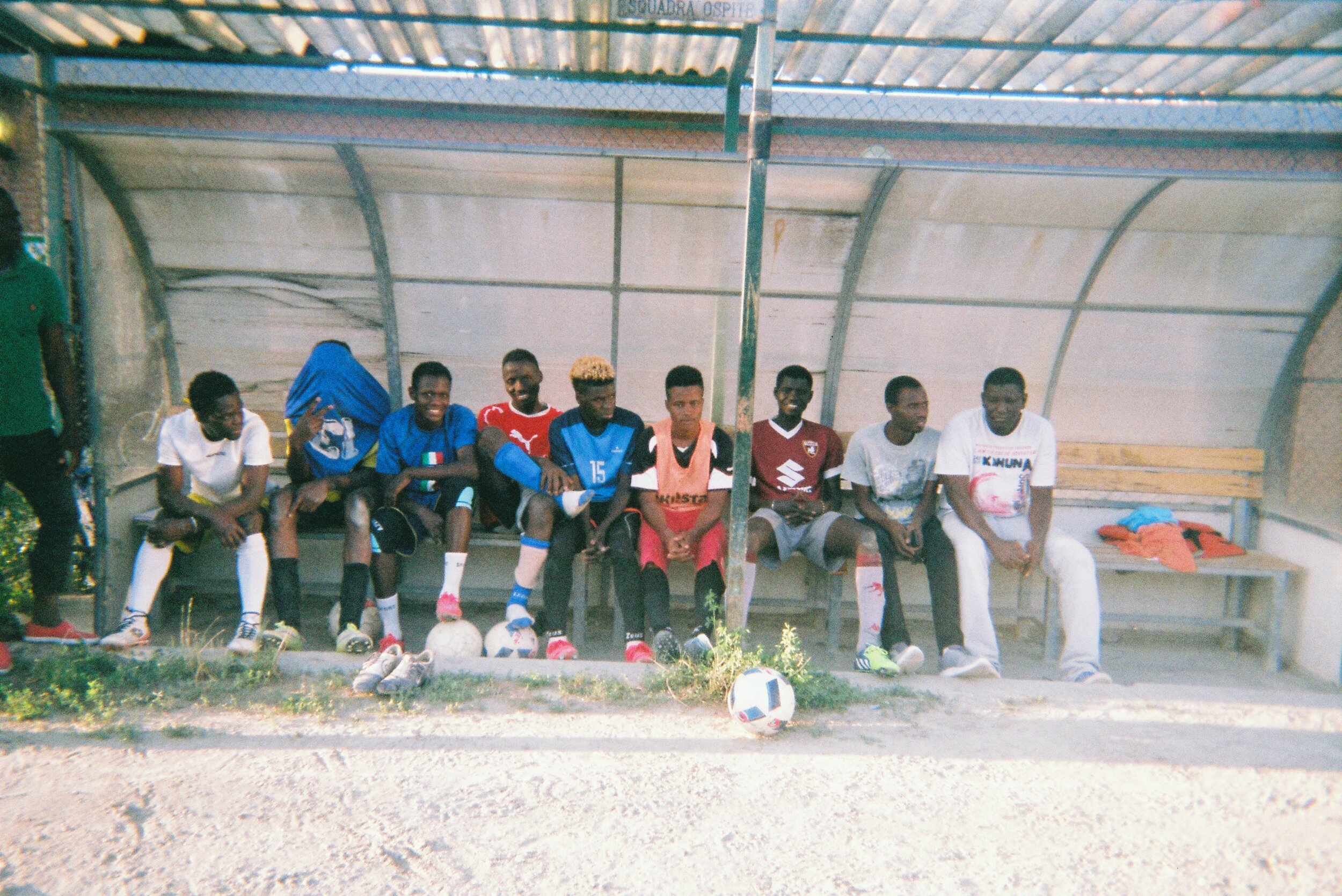 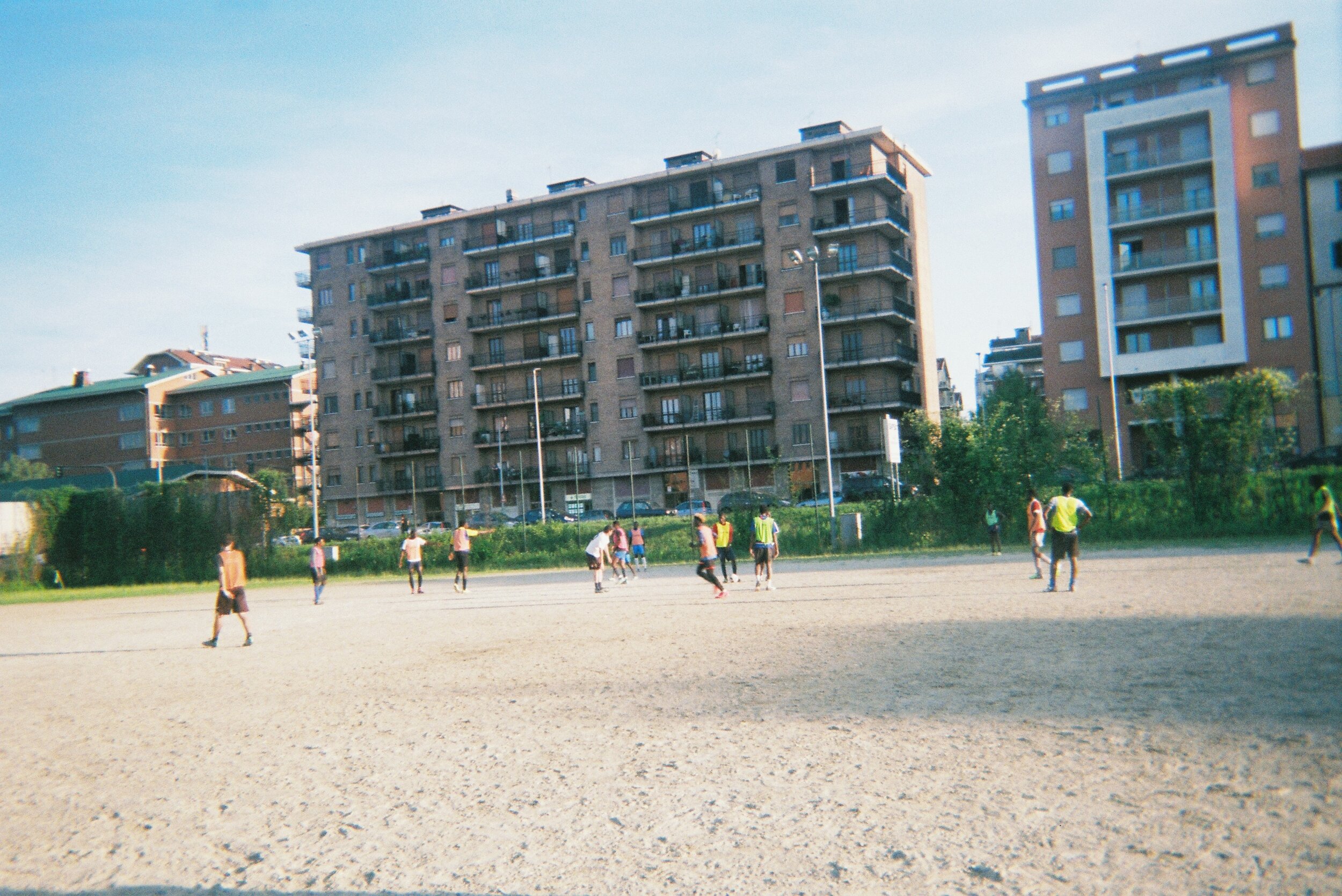 I arrived in Italy, in Rome, in 2012 and I lived for six months in a reception centre. Then I lived in a group house and in 2014 I moved to Torino. There, in July I met Balon Mundial and the President of the Association, Tommaso. Balon Mundial gave me the opportunity to have an internship at L'Oreal and this was a good experience for me. Then I found a job for one month with the Red Cross. At the end of this month, in 2016, I started civil service with the Red Cross for ten months.

Now I'm working with refugees and finishing my third year of night school in electronics. I recently got my driving license. I will finish school this summer and I'm getting ready to start my diploma in electronics.

The Covid-19 emergency has stopped my latest project with Balon Mundial, a job bureau focused on immigrants and refugees. With one guy from Mali (he was a player from our team) and one girl I want to open a help desk to help migrants and refugees with the important information they need about bureaucratic things - how to search for a job, how to write a CV, how to find a flat, how to find cultural events in the city and so on. I want the "help desk" to be at the Balon Mundial office. I hope to start this again soon. 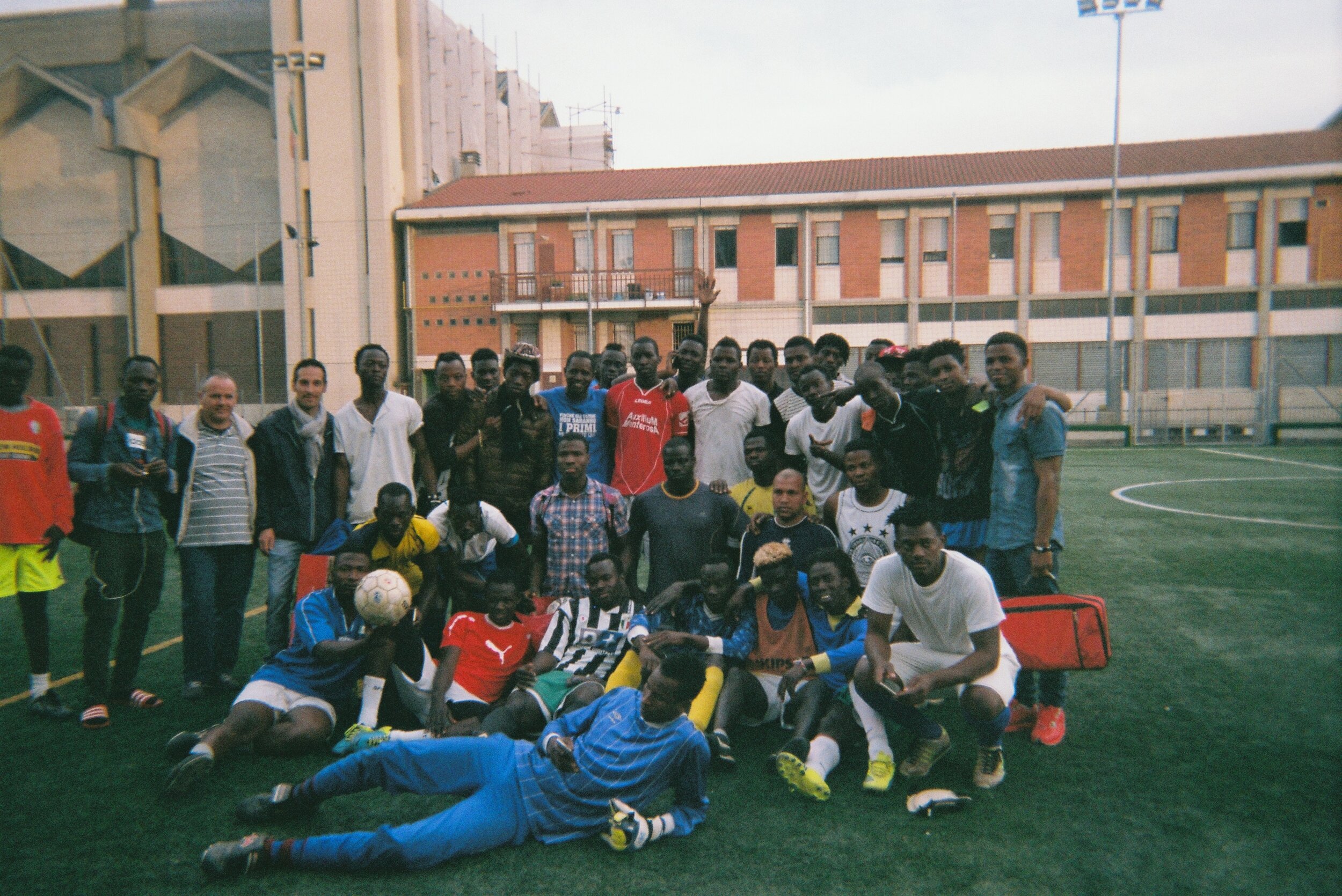 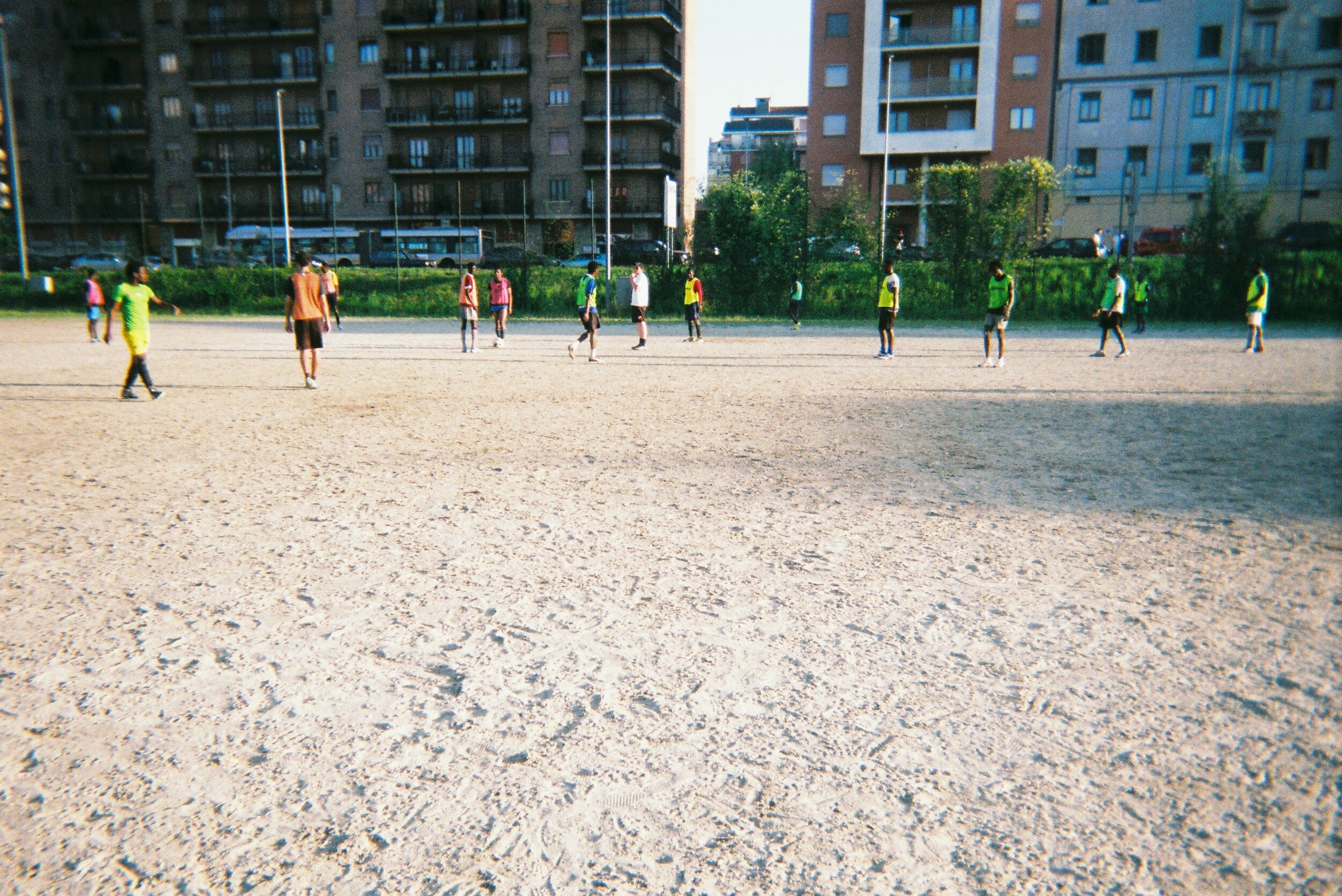 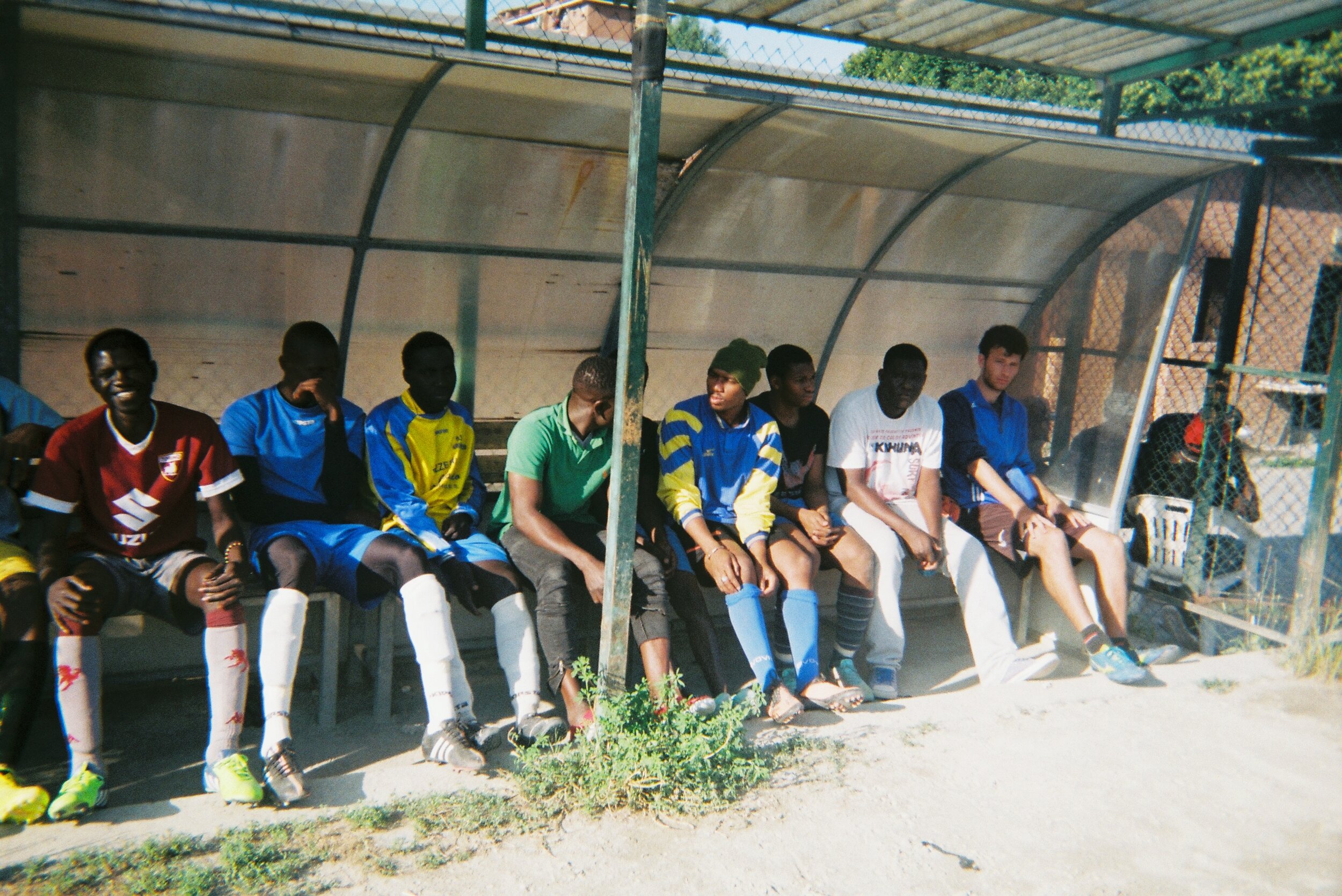 These photos represent three different moments of my life and my path through football during the last year. Football changed my life, not only here in Torino where I live now, but in Rome too when I had just arrived in Italy. Through football I met a lot of people, a lot of friends who helped me so much. Thanks to football I found a job and a lot of good people.

The photos were taken in the “La Colletta” sport facility in Torino during the Balon Mundial Championship, in Via Oxilia where Senza Frontiere usually practice, and in Settimo Torinese during a football match between Senza Frontiere and the football team of the Red Cross.

Most of the photos show the refugees’ football team of Balon Mundial, Senza Frontiere Football Club (it used to be called “Hearts of Eagle”). This is a football team formed by refugees and asylum seekers that practices all year and during the summer participates in “Balon Mundial – the World Cup of Migrant Communities”. There are also photos of our team together with the football team of the Red Cross.

The guys are all refugees and asylum seekers I met at Senza Frontiere. Everybody has their own beautiful story. There is also a female team called Queens. 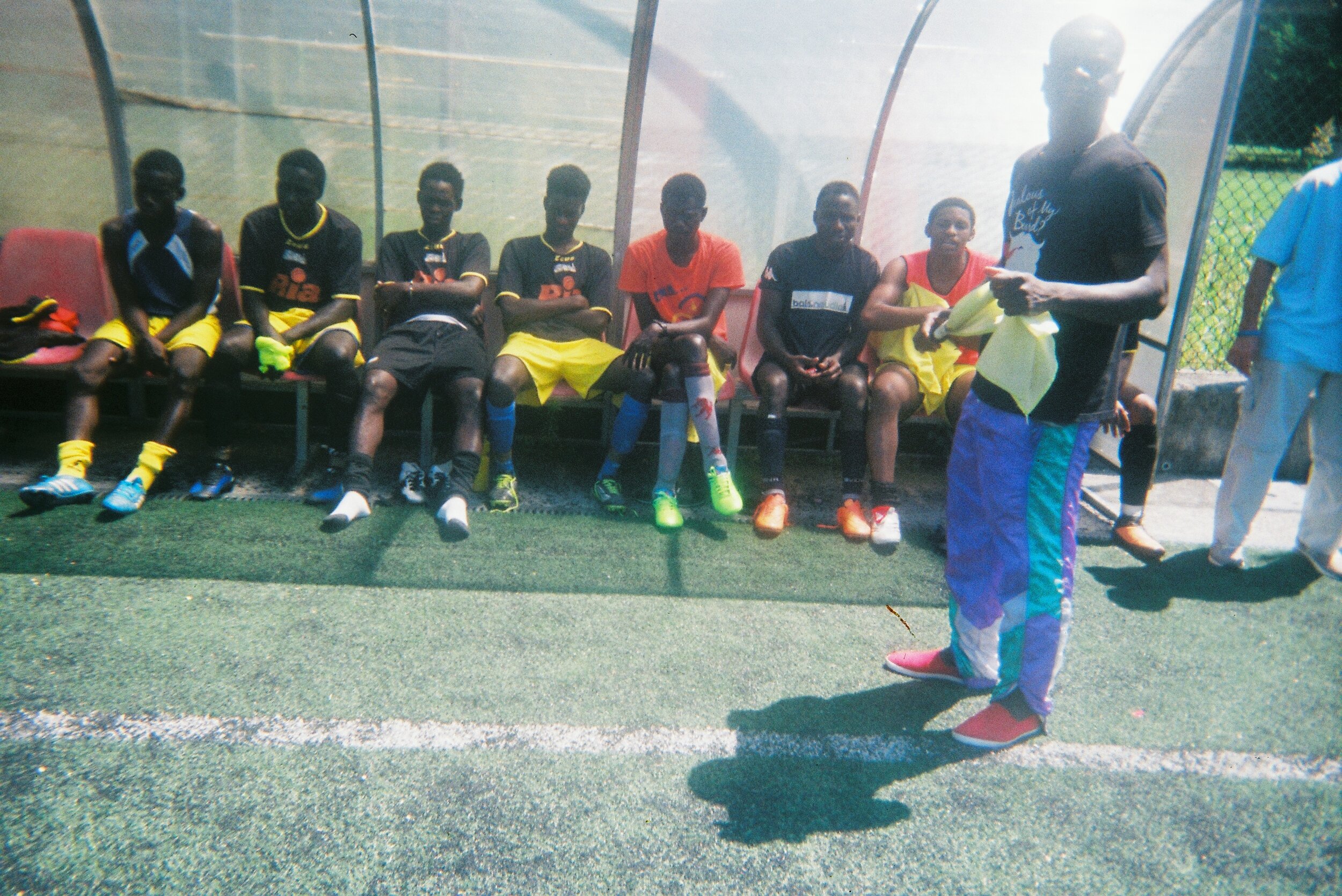 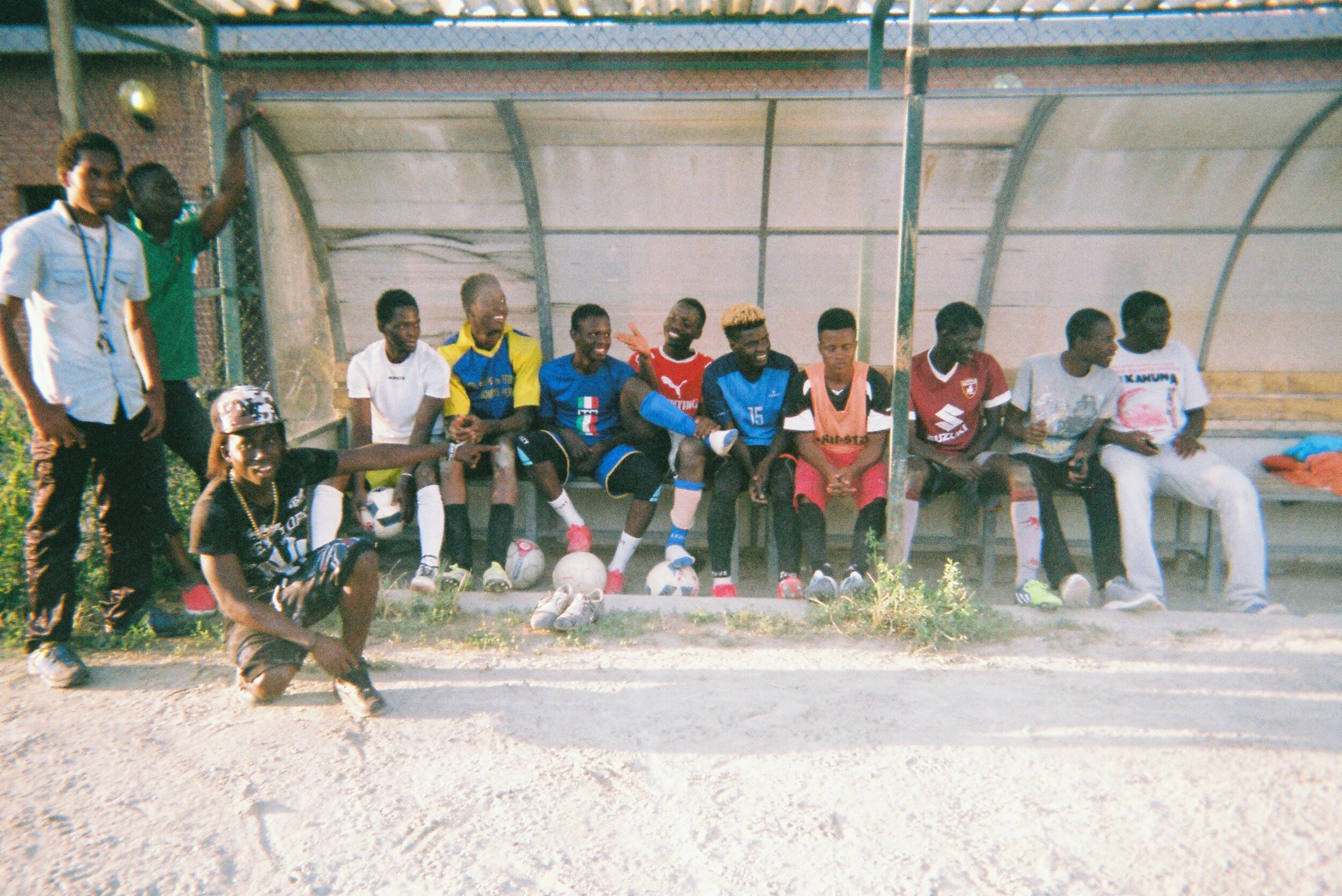 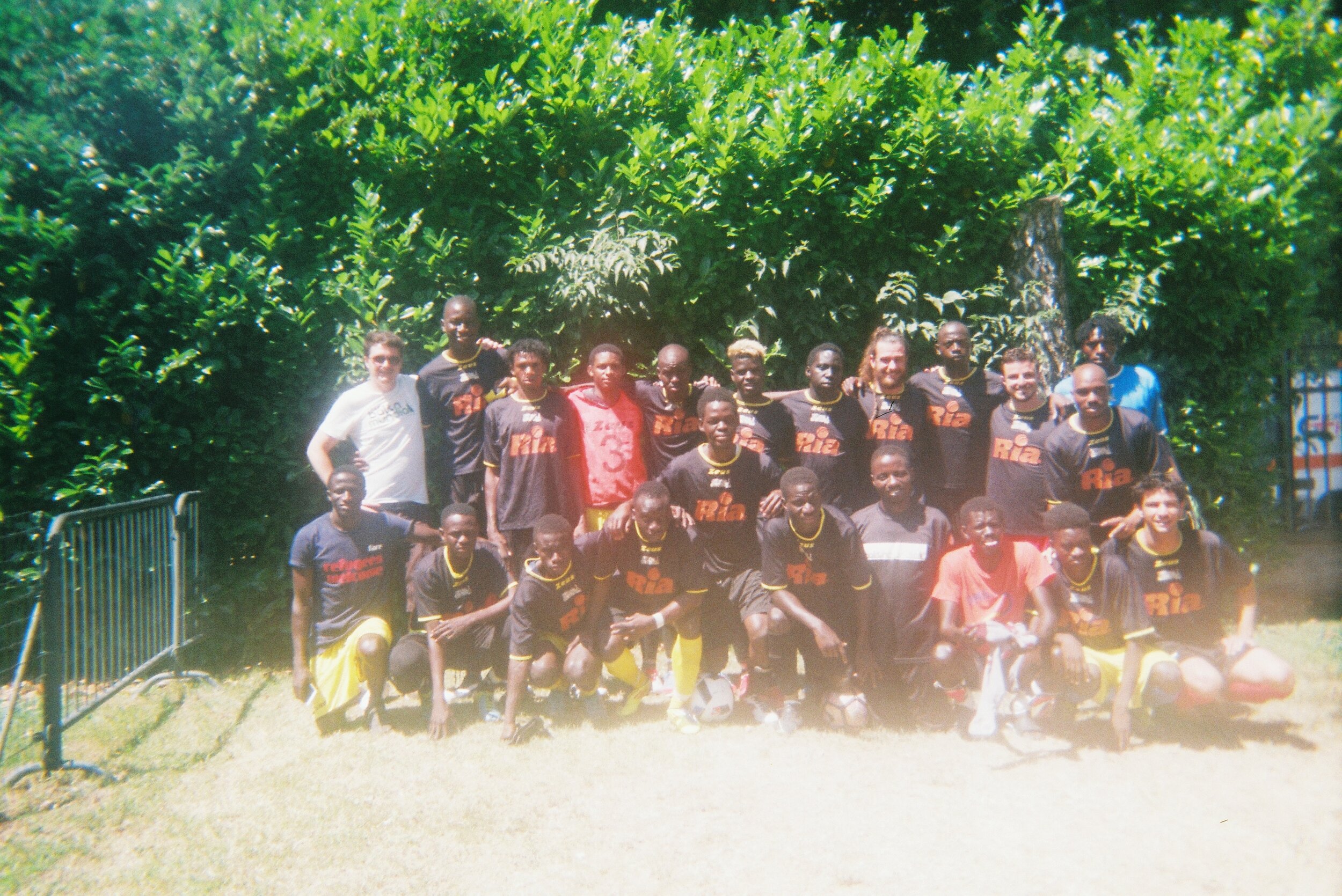 Did you play football back in Senegal?

I played football with my friends in Senegal. We always organised a tournament during the rainy season in my village called Sediou.

What is your favourite photo?

My favourite photo represents a beautiful day when I organised a football match between our refugees’ team Senza Frontiere and the team of the guy who worked with me at the Red Cross.

What role does football play in your life at the moment?

At the moment I'm continuing to play football. I'm managing a refugee football team and we played in our first tournament organised by Balon Mundial. 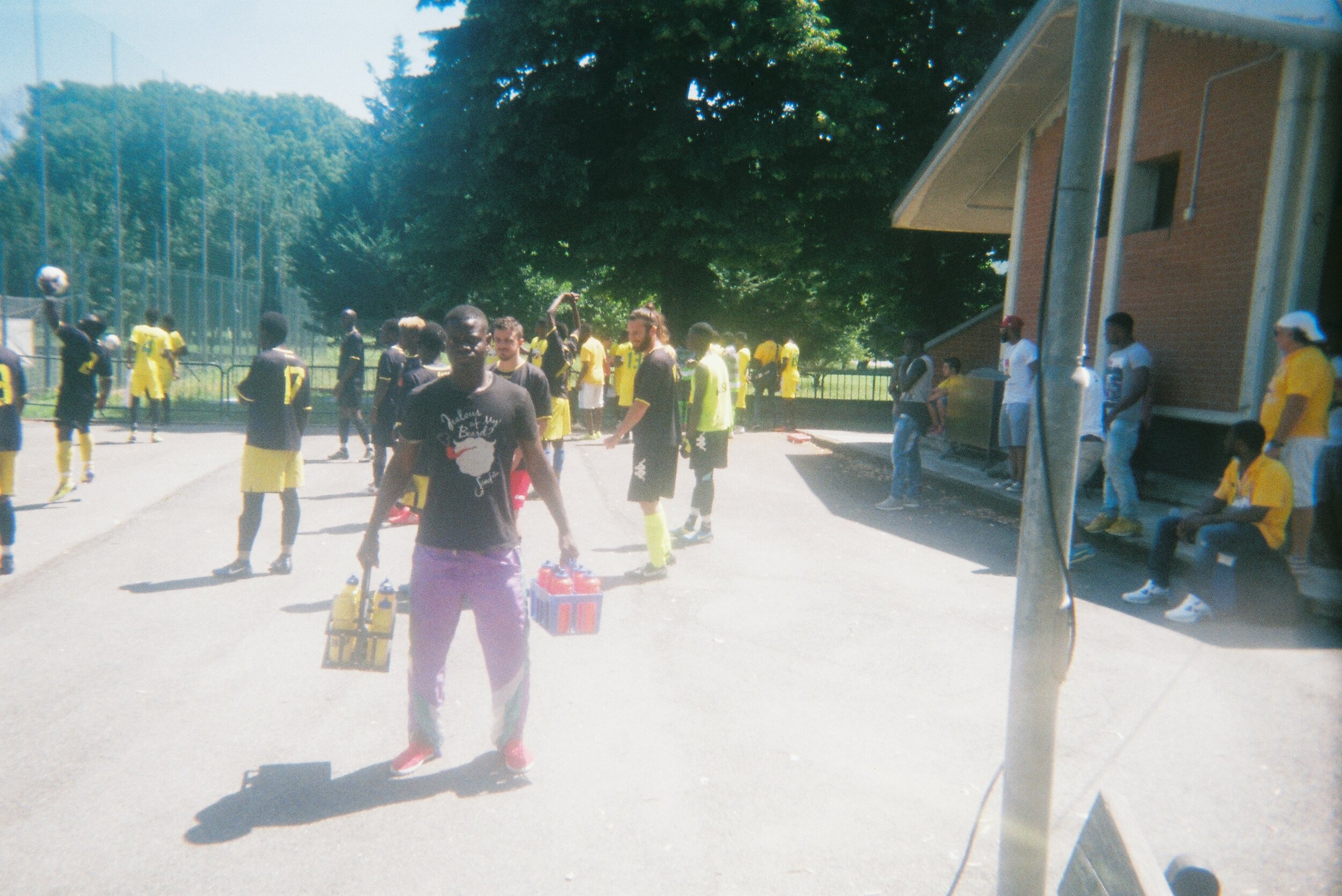 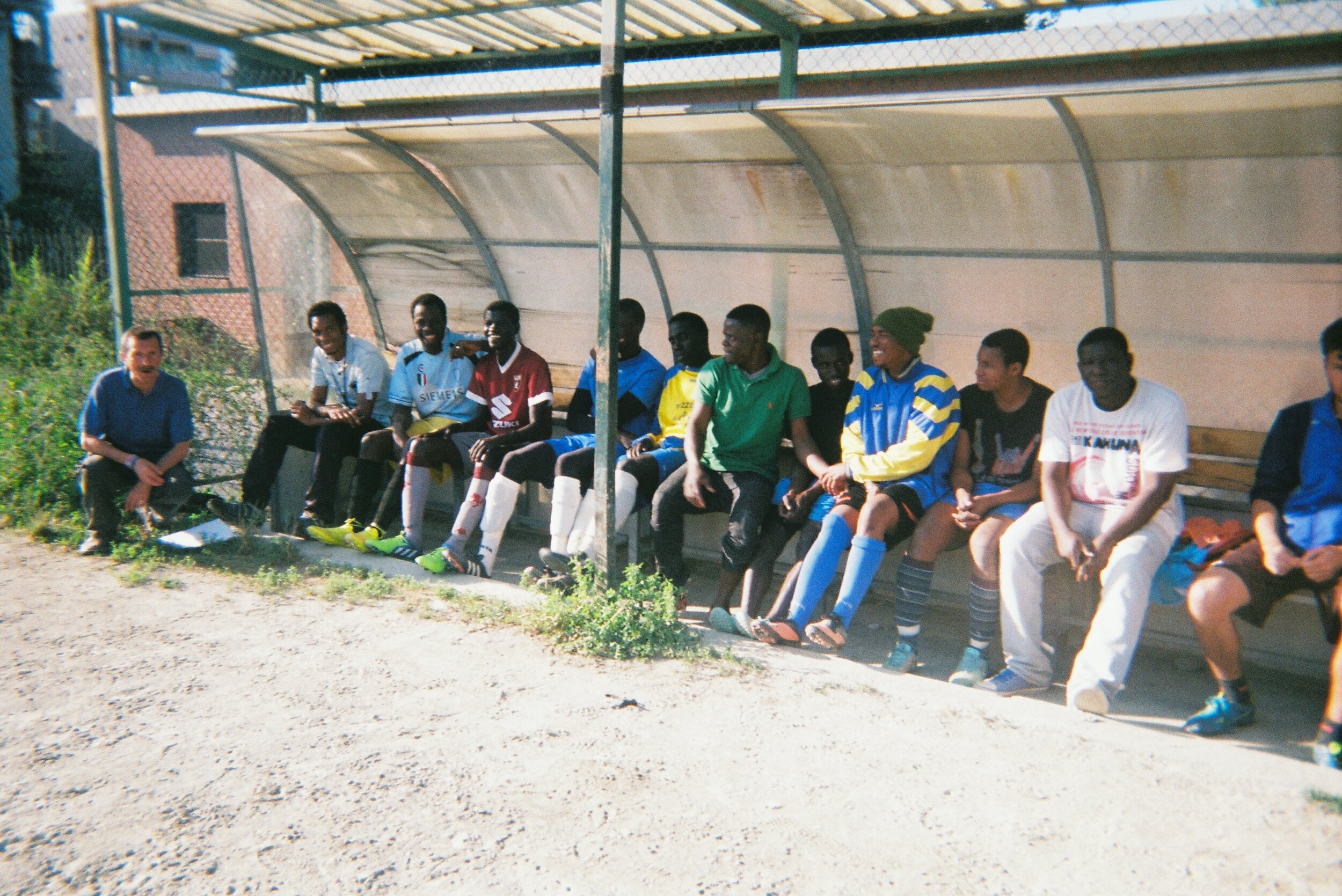 How important is football in Italian society?

For migrants who came from Africa football has a fundamental role because guys can find a place where they have fun, play and meet friends. They prefer to play football instead of staying home all day doing nothing. But I don't know why it is important for Italian people.

Do you play football now with any Italians? How do you find the Italian people?

I play in a team with Italians and refugees in the Senza Frontiere FC project run by Balon Mundial. I like Italians, they are good at football, and I have a lot of very good friends here.

I have a lot of plans! I wanted to get my driving license and finish school as soon as possible. Then I want to help other guys to find a job and to find the right way in their life. And I want to open a Senegalese food restaurant!!! 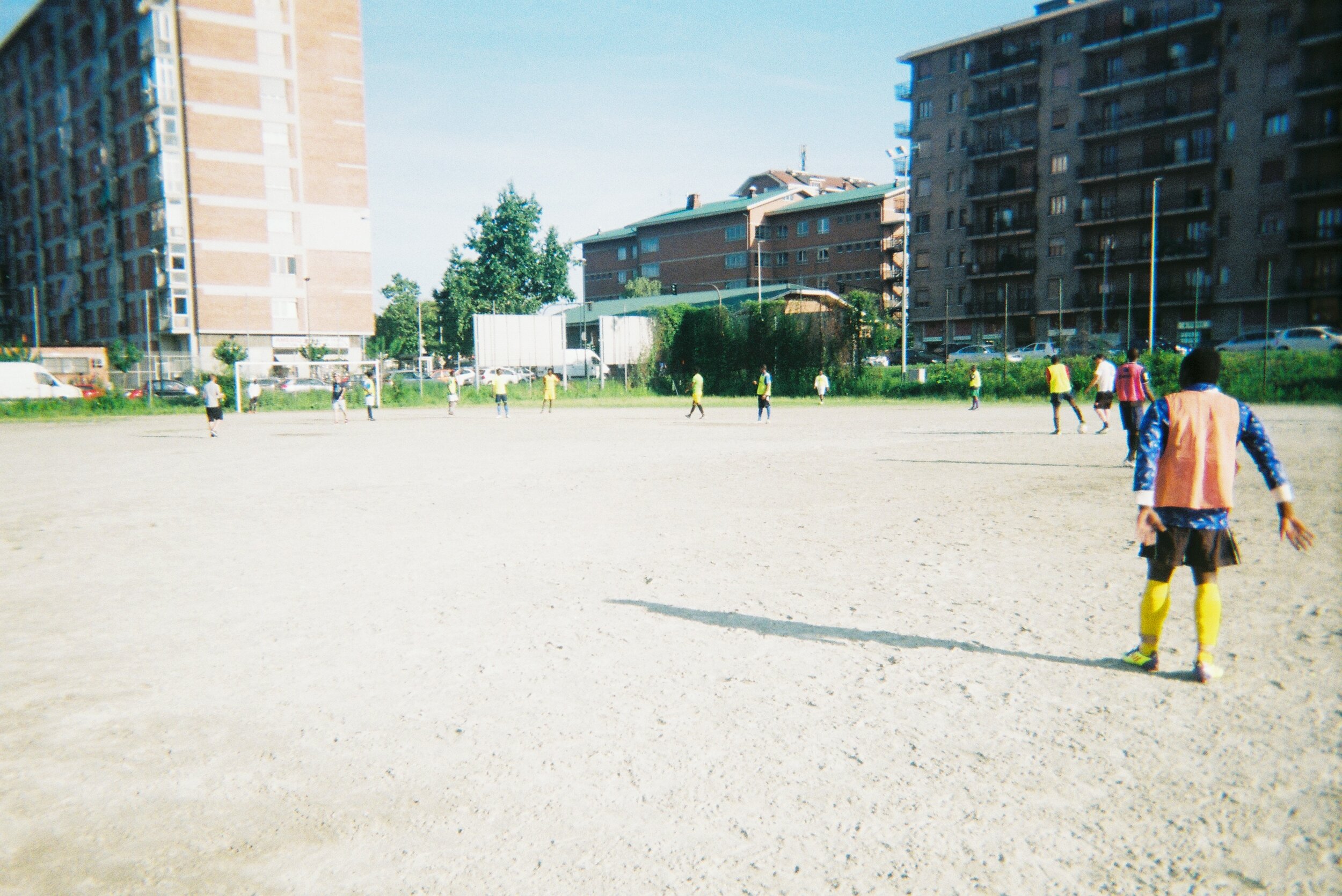 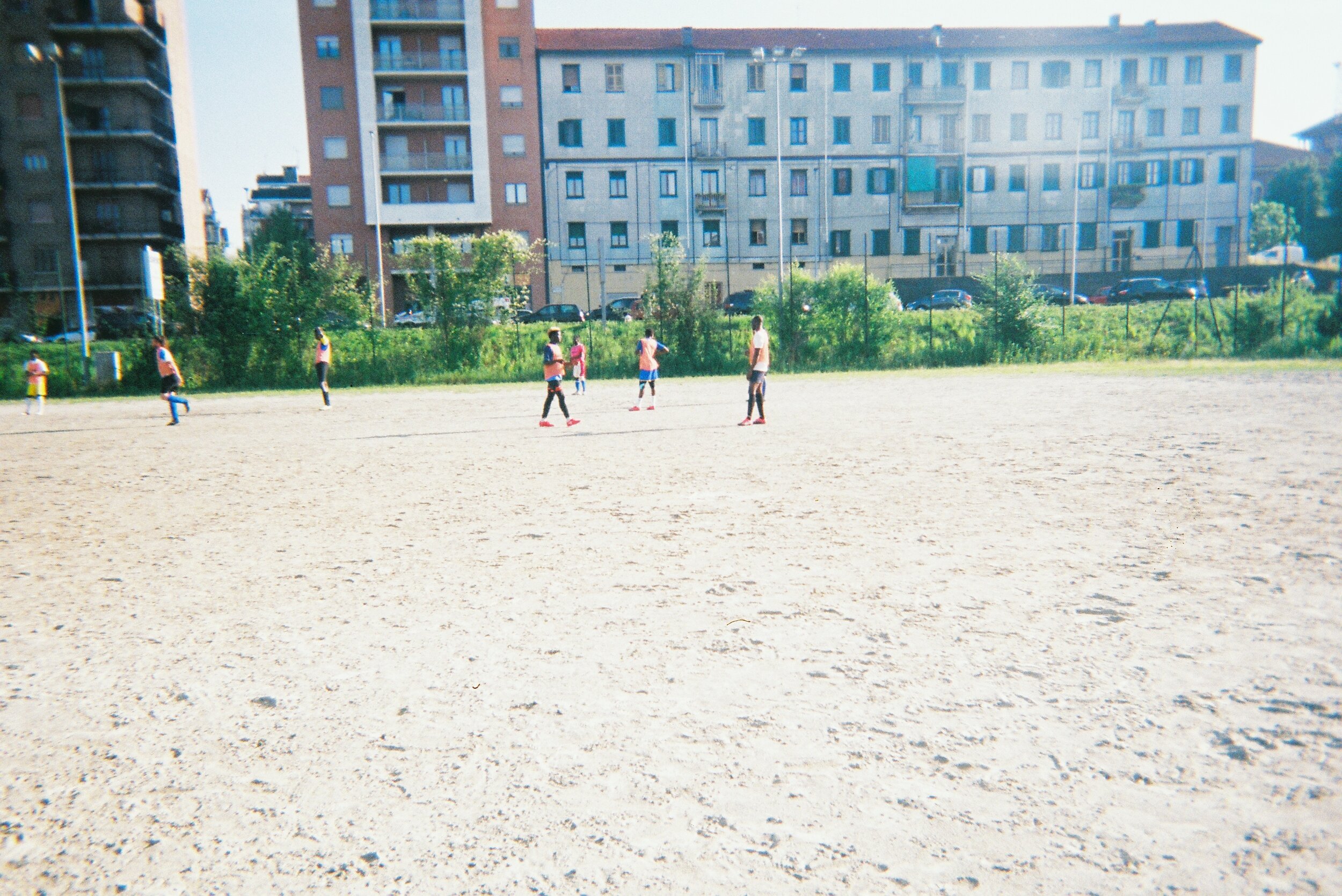