HomeNews and viewsNewsHow the healthiest nations stack up at the Olympics

How the healthiest nations stack up at the Olympics

How the healthiest nations stack up at the Olympics

The Olympics help us consider the ways in which social determinants affect health on an international scale, and the games reveal the scope of public health as it intersects with social, economic and clinical landscapes.

The 2016 Summer Olympics in Rio de Janeiro raised a lot of questions about public health, including some we may not have expected. Are healthier nations more successful in international athletic competitions? What does it really mean to be healthy? Though there are variety of answers, the following graphic explores one lens through which to view athletic success and health: the all-time Summer Olympic medal counts and rankings on the United Nations’ Human Development Index (HDI), which determines an aggregate measure of a nation’s health based on life expectancy, education and income per capita. 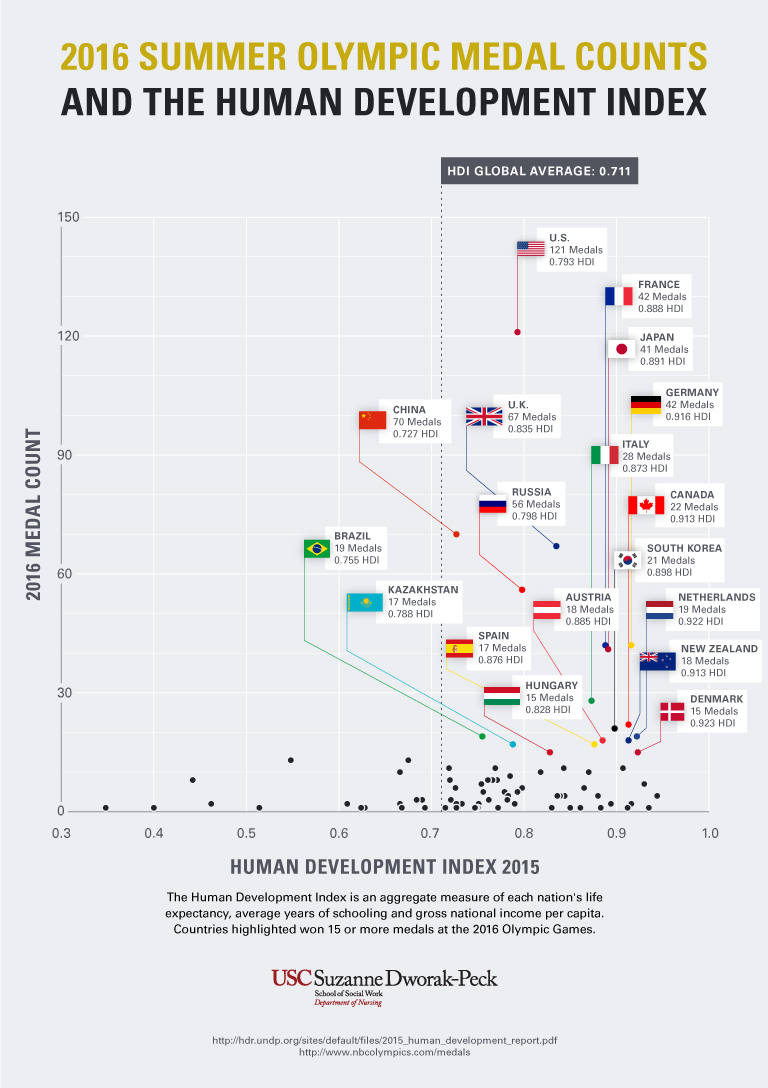 The HDI does not encompass the only indicators for health, but it does serve as an exploration into the multifaceted definition of health and human quality of life, both of which influence the circumstances that allow countries to put forth successful athletes.

When comparing medal counts to the HDI, a trend emerges. The nations with at least 15 medals fall above the global average HDI ranking of 0.711, and 14 of those nations rank above the 80th percentile. In fact, all members of the Group of Eight (G8) industrialised nations finished within the top 10 of the Olympic medal count. This does not mean that the HDI predicts Olympic success, but it does illustrate one of the many benefits of a nation investing in its citizens’ health.

Additionally, countries ranking far below the global HDI average earned fewer medals in comparison to those that highly ranked. This included Burundi, Niger and Ivory Coast, each of which earned one medal this year.

On the other hand, Kenya, South Africa and Ethiopia won 13, 10 and 8 medals, respectively, despite ranking below the global average. However, these nations sent very few athletes to the Olympics in comparison to top-performing countries. With a high count of medals-per-athlete, these three nations illustrate that in cases where resources are limited, investing in fewer, more promising athletes can be more effective than sending hundreds of athletes to compete.

Though there is no HDI ranking available, Kosovo took home its first medal in the nation’s history. This is the first year Kosovo participated in the Olympics as an independent country by sending eight athletes – one of whom won gold – a rate of medals-per-athlete that also rivals many top-performing countries.

Nursing@USC is the online family nurse practitioner programme at the University of Southern California's Suzanne Dworak-Peck School of Social Work.