HomeNews and viewsNewsSport versus patriotism

What happens when sport is used as a political tool?

The Super Bowl takes place each winter, and is akin to a national holiday for football fans across the United States. As per tradition, the sitting president invites the winning team to the White House. In the past, most team members would accept the invitation, putting aside political opinions in favour of a friendly celebration of sport.

However, like many political traditions since Trump has taken office, things have changed. This year’s champions, the Philadelphia Eagles, were set to visit the White House on 5 June, though many team members had opted out. The US president then announced via Twitter that the invitation had been rescinded. Instead of celebrating football, the day would be devoted to a "Celebration of America." 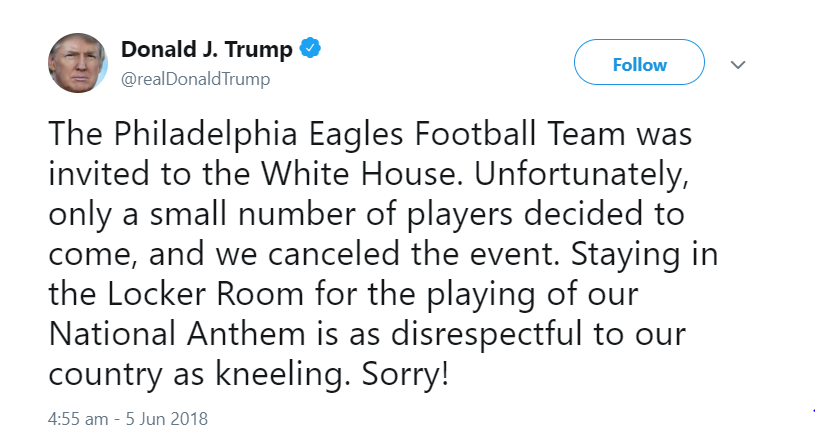 Putting aside the false insinuation in this tweet, (the Philadelphia Eagles did in fact stand for the anthem) sport versus patriotism is a dangerous dichotomy. We often praise sport’s ability to unite people and break through barriers, but it can also be highjacked for political agendas. In the case of Trump and football, this has proven to work.

While the president’s opinions on the matter are debatable, his influence is unquestionable. The opposition to players kneeling during the national anthem to protest police brutality toward people of colour has grown in popularity, in large part because of his many tweets on the subject. In the midst of the controversy, the National Football League (NFL) established a policy change. All players will now be required to stand for the national anthem or remain in the locker room for its duration. Anyone choosing to kneel will be fined. NFL Commissioner Roger Goodell said the following about this choice:

“We want people to be respectful of the national anthem. We want people to stand, that’s all personnel, and make sure that they treat this moment in a respectful fashion […] We do believe that that moment is an important moment and one that we are going to focus on.”

To be fair, the president alone did not influence this change. A large number of Americans agree that playing the anthem is an important moment of the game, citing respect toward the country and its military as the reason. Some also believe that the football field is not the place to make political statements. This is the “shut up and do your job” argument—i.e. football players should just be there to play. But why is it football’s job to promote nationalism in the first place?

In the upcoming FIFA World Cup, fans around the world will root for their countries, donning colours and waving flags—and there is nothing wrong with supporting a team and celebrating culture. However, a problem occurs when we expect sport itself to take on a nationalistic role. NFL players have a huge platform, and using it to call attention to social justice is their right. Silencing their peaceful protest is the opposite of patriotism.