HomeNews and viewsNewsLet’s build a playground

How can you transform a dirt patch into a playground on a shoestring budget? ELMS Sports Foundation guest columnist,
Deepak Dennison shares his story.

Our Infant Jesus Matriculation Higher Secondary School did not have a functional playground. Occasionally, our students would gather at an empty space adjacent to the school to simply run around and play. Sometimes the students used to indulge in risky play and run around frantically in that space. Even though the students were enjoying it, it was not completely safe for them to play in that area. This led us to see the importance of having a functional and safe playground for our students.

A few months ago, we began with the task of building a playground within our school. The idea was to design a child-friendly playground for students and with the help of students. We had a paltry budget of Rs. 25,000 (around $350 USD) for building the entire playground. We realised we couldn’t afford any outside assistance from commercial organisations. So we decided to do everything on our own.

Every resource is already out there

There is no denying the fact that at first it seemed daunting to design and build an entire playground from scratch. The task at hand began like any other DIY project would - with a Google search. Fortunately, we stumbled upon an amazing website called playgroundideas.org which comprises over 150 free DIY designs and how-to handbooks for building a playground using local, low-cost, and recyclable materials such as used and waste vehicle tires. The website also hosts a 3-D playground designer using which anyone can design and model their playground. However, before starting with the 3-D model, we surveyed the area and identified problems of water stagnation and snakes. Then, we used the SketchUp application to model the 3-D design of our playground. With all the knowledge and resources available, we started with building the playground

Create excitement and engage all stakeholders

When we first proposed the idea of building the playground using recycled tires, there weren’t any takers among the school’s stakeholders. However, their attitude changed when we showed them the images of the 3-D model and photos of other playgrounds built using tires. Thus, we built excitement around the project to engage with the school management, teachers and students. Once we had their buy-in, we even invited them to participate in the playground building process. Our school community comprises around 1,200 students who were all super excited about the project. Their infectious enthusiasm got the teachers as well as the parents involved in the project.

Based on the 3-D model, we estimated that we would need around 150 tires. The number seemed impossible to procure, given the short time span we had. However, we were pleasantly surprised when several of our own students came forward and initiated a collection drive for tires from their neighbourhood. This gave them a sense of ownership and at the same time made the process easy.

At one point, we had more tires than what we needed, but unfortunately, they were not exactly the type of tires we were looking for as per our designs. So we went back to the drawing board and modified our designs to work with the available tires instead of giving up. From the start, we had a rule of thumb to not say ‘No’ to anything that we were getting for free.

Just the idea of being open to situations and challenges throughout the process opened up so many unforeseen possibilities for us. We could eventually install six extra play structures such as the hopper, pyramid, caterpillars, climber, and two motorbikes to the previously planned three (Tha Wha Car, Multipurpose Tire Court, and the Angled Climber) at literally zero additional cost. While we were building the structures, our students, along with 20 other volunteers from the Young India Fellowship, painted the playground.

We had a very fulfilling experience throughout the playground building process. Today, it’s an absolute joy to see students play in a safe and stimulating environment. In addition to making students physically fit, the playground is also profoundly impacting their cognitive and behavioural skills development. It fills us with pride and hope to see students develop and design new games using the available structures in various ways which we hadn't even imagined. 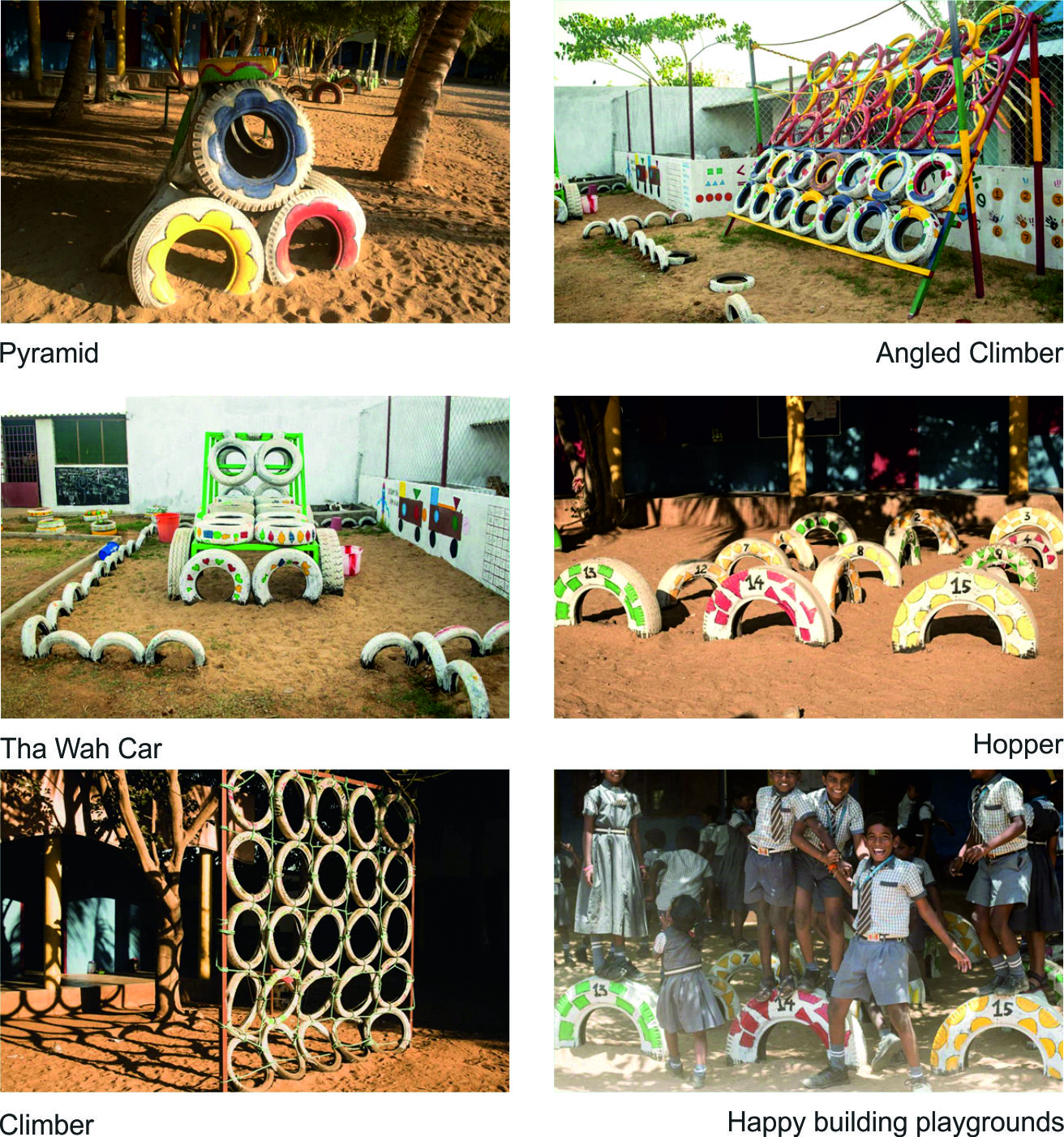 Download the ELMS Newsletter
Visit the ELMS Foundation website
Related article: How a crowdfunded programme in India is bringing children into sports!
Learn more about healthy development of children and young people through sport
News
Published: 02/04/2021 - 10:26